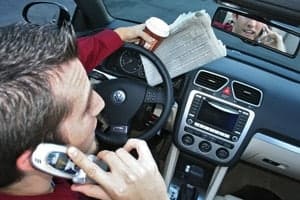 It is that time of year again when state legislators come together and hundreds of bills are drafted and pushed through the process.  This year in Arizona, State Senator John McComish is sponsoring a bill that would ban wireless devices in the cars of new drivers.  While I have been accused of being a zealot about the topic of cell phone use in vehicles, I am not in favor of this particular bill.  If we are going to ban cell phones, then they need to be banned for ALL drivers, not just teenagers.  I am on the road every day and I see people crossing the white or yellow line and MOST of the time they are on a cell phone.

If we were being honest, we know for a FACT that it is NOT just teens that are driving recklessly with eyes on their phones instead of the road.  Are they the most “at risk?”  Absolutely.   They are novice drivers and it is of utmost importance for them to be focused on the road, but it does not alleviate the need for them to have good role models in the adults in their lives, or to change the mentality of drivers of all ages.  Legislation is not the answer to this problem.  I am always for traffic safety legislation, stiffer penalties and making the laws stronger, but laws in and of themselves will not change the cavalier attitude people have about driving.

Click here to take an interesting awareness test.  Our brains are JUST not wired to pay attention to multiple things.  When we are driving, no matter what age we are, we need to stay focused on the road and what is going on around us.  When did our vehicles become our entertainment centers or our offices?  The fact that cars sell based on electronic packages and not safety features is pretty telling in and of itself.  So, of course, car manufacturers are giving the customers what they want – all the latest technology and bells and whistles they could possibly dream of.  The Detroit Auto Show is going on this week and in a recent article in the Detroit Free Press, young drivers said they wanted “a smartphone on wheels.”

While there is a concerted effort to make the electronics “less distracting” they are a distraction in that they take our ATTENTION away from driving.  It is a split second when something happens that we are not prepared for and someone’s life changes forever.  Why is it no one seems to get this and more importantly why don’t people care?  I believe the answer to that question is because it hasn’t happened to them, and my reaction is, how selfish we have become.  Read this open letter from someone that it did happen to.  She didn’t expect it either, but yet it happened to her because someone else was distracted behind the wheel of a car.  Is that the ONLY way people are going to “get it?”  If it happens to them?  How unfortunate for all of us.