Photo Radar Cameras Under Attack Once Again in Arizona 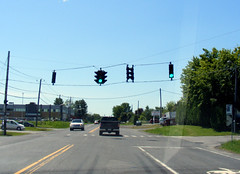 An article published on September 5, 2010  documented a renewed effort by a group in Arizona to abolish the use of photo cameras in cities that now utilize them.

The same argument is still being put forth:

“……the cameras violate the constitutional right to due process…… (ticketed drivers) do not have the same protection in court as someone who receives a ticket directly from a police officer.”

The stated desired alternative is to have enough police officers on the road at all times to deter red light runners and speeders?  Give me a break.

How can anyone, with a clear conscience, argue that issuing a ticket to a person running a light a second or two (green-yellow-then red) after it has changed is a “violation of due process”?

There is somewhat of an argument against speed violations in AZ, since our legal system has two different laws in the Arizona Revised Statutes (ARS) that are used for ticket issuance:

The latter, I would assume, was included to allow the police officer to cite anyone driving at an excessive speed for the conditions (ie, too fast even though under the limit).  This Statute has been subverted in intent, requiring police officers to document why significantly exceeding the posted limit is not reasonable and prudent.

That too, is ridiculous in my opinion, since the speed limit is not posted as a suggestion, but as the legal limit.  Again, how can anyone believe that traveling 11 mph over the posted limit is “reasonable and prudent” at any time?  The limits are set for the conditions of the roadway, and when you exceed those limits by 25% or more (in city conditions) you are endangering the other users of that road.

First, there are usually multiple locations where traffic can suddenly come out into the road in front of your vehicle, making it necessary to react.  Next, beyond traffic, the roadside will typically have restricted line of sight areas where people or animals might enter the line of travel.  Driving well over the limit also reduces your ability to react in time to a changing traffic signal.  Finally, there are drivers waiting to either cut across the road or merge onto it, who should be able to reasonably expect oncoming traffic at the posted speed.  When you are well over that limit, the likelihood of a dangerous mistake being made is far greater.

I invite anyone associated with this renewed effort to come to our driver training facility and let me demonstrate on our simulator the difference even 5 mph in approach speed can have on your ability to react in time.