The practice of driving while distracted has become more than just a problem among drivers in America; it has truly become a national crisis.  Nearly 6,000 people are killed every year in car crashes caused by distracted driving, and the number is growing. Teen drivers are at the highest risk in these types of collisions, and it is time that as a society we take a stand against this deadly problem.

TASER International is hosting a distracted driving summit this fall.  The summit will bring teenagers together to engage them in developing solutions to the problem that will speak to their peers.  Those of us involved in traffic safety initiatives understand that there is no silver bullet to solve this problem.  (There usually isn’t, we just like to think there is).  This problem will require a deliberate shift in the social consciousness  because today too many people think it doesn’t pertain to them, that they are good drivers and they “know” how to talk on a phone and drive or they “know” how to text and drive.  They have the “it’s not me, it’s them” mentality.  When I think about this problem and the mentality of many people the infamous words of Pogo come to mind:    “we have met the enemy and he is us.” 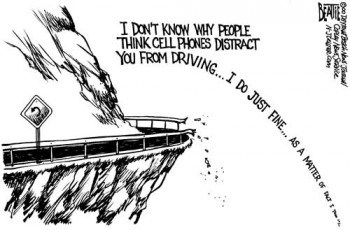 Developing solutions to this problem means safer roadways for everyone. This issue impacts anyone who drives or rides in a vehicle as well as anyone who rides a bike or walks on city streets. While vehicles have become smarter and safer, drivers have become more and more careless. With the onslaught of technology to distract us, people have become complacent about the significant responsibility they assume every time they get behind the wheel of a car. At the end of the day, it is the driver that controls the vehicle.

In order to cause a shift in the social consciousness, we need to raise awareness of the problem.  Cultural Icon, Oprah Winfrey,  initiated the No Phone Zone movement and thousands of people have signed the No Cell Phone Zone pledge.  Oprah continues to urge Americans to “get off of their phones while driving.”    The Arizona Distracted Driving Summit is targeted towards our most at risk drivers – teenagers.  There is no better place to start than by engaging and educating young adults; and there is no one better to build an awareness campaign that will resonate with teens than teens themselves.

The Arizona Distracted Driving Youth Summit is designed to expose a large group of passionate students to industry and subject matter experts and then facilitate the creation of a distracted driving awareness campaign designed by students, for students.