Behind the Wheel: Some Students Don’t get the Opportunity to Learn from Their Mistake 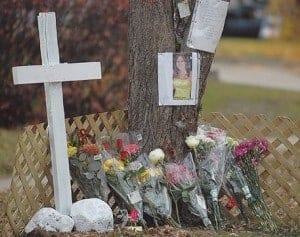 I recently did two presentations for a local high school’s Health & Safety classes on the topic of teenage driving.  The first session had a handful of students that had their license and a few with permits, but most will be preparing to drive in the next year or two.   I was dumbfounded by my experience with these students.  My presentation was just under 2 hours and I was in their face about choices they make and the fact that the carnage occuring on our roadways needs to stop.   I had one student ask whether I use a particular video that has shots of dead bodies, I was a bit taken aback and asked the question – “so you need to see death before you believe me?” He and a few other students said, “yes, it helps.”   I had another student say that “until we (teenagers) experience “it” for ourselves we aren’t going to change.”  I stood there and said: “so you’re telling me that you cannot learn from what I am sharing with you, or the fact that most of your peers stood up in this room when I asked “how many of you have lost a friend or had a friend in a car crash?” ”  He said, “yes that is what I’m saying.”   In that moment, I felt like I couldn’t breathe.  I am not usually at a loss for words and I had no idea how to respond to this young man.  A female student raised her hand and I called on her, she said, “smart people learn from their mistakes, really smart people learn from others mistakes.”  It was as if she sent me a lifeline.  If we cannot get these young people to understand the risks they take often turn into senseless tragedy BEFORE they experience it for themselves, then what hope do we have for changing the devastating trend in America?

What she said, in that moment, will remain with me forever.  The remainder of the presentation had it’s ups and downs and as I finished a young girl in the front row said, “I’d like to say something,” and I said of course. She stood up and said she was from Hawaii and that Hawaii is one of the worse states for drugs, and alcohol use and as a result driving fatalities are also commonplace.   In the past 6 to 7 months she has lost 9 friends to car crashes.  She started to cry because she wasn’t able to go back and attend their funerals and mourn.  She then proceeded to describe a car crash she herself was in where she disobeyed her parents and had her X- boyfriends young brother in the vehicle and how he could have been killed.  Now, she suffers from Post Tramautic Stress Disorder.  She pleaded with her classmates to take heed. I went to her afterwards and said, “I can’t even imagine what it would be like to lose 9 friends and then experience a crash yourself.” I gave her my card and asked her to call me because I want to video tape her story, because her story needs to be told.

During the presentation I heard story after story of parents that are terrible role models and when their kids tell them to stop a dangerous behavior in a car (texting, for example)  they tell their children to shut up.  I was mortified to learn that these young, impressionable teens, during a time when they need guidance and good role models, are being shut down by the very people that should be setting a good example.  Folks, we need to change the sentiment in this country about driving.  Our vehicles are not our offices, they are not our entertainment rooms, they are not where we should be doing anything we didn’t have time to do before.  They are machines that have a purpose and that purpose is to provide mobility and get us from point A to point B.  It is up to the operator as to whether we do it safely.    Do you realize that your child is more likely to survive a tour of duty in Iraq, then they are on U.S. roadways?  We lose approximately 6,000 teens every year to car crashes and thousands more are injured.  Anywhere from 10 to 15 teenagers lose their life on our roadways every day.  Think it won’t happen to you?  It happens to someone EVERY SINGLE DAY!

These statistics have an impact on me as an educator and as a parent.  As parents we all need to sit up and take notice.  Unless the lessons of safety start at home, these kids start this process at an extreme disadvantage.  They need the adults in their lives to show them the way, not to shut them down.  Don’t wait until something happens and then throw your hands up in despair and say, “how could this happen?”  It happens all the time.  Sometimes, to those that do take all the precautions and talk to their kids and instill a sense of responsibility.  It happens to them because others have not done their job as parents.  It  is up to us to help our children develop a healthy respect for the fact that not only do they take their own lives into their hands when they are behind the wheel of a vehicle, but also the lives of everyone else that is on the roadways.  As I said to a couple of young ladies in my second class that day who thought everything was funny, “do not take one of my family or friends out, because then you will have me to deal with.”  They stopped laughing.